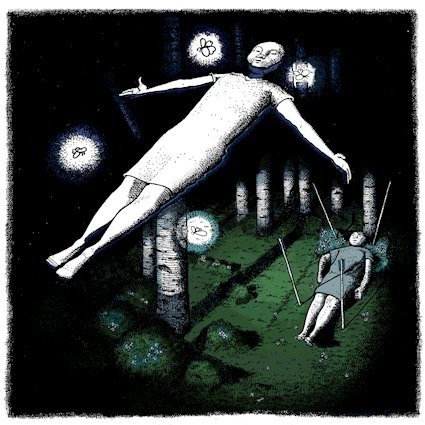 A lot has happened to Seattle’s Great Grandpa since the release of 2017’s ‘Plastic Cough’, not least all of the band members relocating across the US. However, they found this break – from familiar surroundings and each other – sparked a new creative purpose when it came to recording ‘Four of Arrows’. The bulk of this record was written (separately) in isolation by Patrick and Carrie Goodwin while they travelled the Midwest and really came to life when the band started recording with producer Mike Vernon (Modest Mouse) at the turn of the year.

‘Dark Green Water’ opens the record with ambient natural sounds before crisp, rich bursts of chamber pop guitars and dual vocals come in: ‘Down by the lake mistakes were made and that’s the heart of this pain’; ‘that dark water will cloak all our deepest intent. It then veers into more psychedelic territory as it reaches its conclusion as the band state ‘I won’t ask anything but forgiveness once I have the courage to explain’. Recent single ‘Digger’ – a song that compares the way a dog would relentlessly dig in a backyard to mental health issues and feelings of isolation – follows with its pleas of ‘That’s why I hate you’ and ‘That’s why I love you’ before the Stars-esque ‘English Garden’ quietens things down with strings and talk of the seasons and perceptions: ‘Wise enough to know the difference but not enough to make a sudden change’.

Two recent singles follow with ‘Mono No Aware’ and ‘Bloom’, the latter of which opens with a blast of emo-infused guitar before the band then Alex Menne captures that feeling when everyone around you seems to be making something of their lives but how you can find hope in your heroes: ‘I get anxious on the weekends when I feel I’m wasting time and then I think about Tom Petty and how he wrote his best songs at 39’. It’s a piece of positivity and the power of love and friendship when you’re in a dark place: ‘I think about my good friends and how they always love me when I am feeling down’. The Max Richter-meets-Tori Amos piano of ‘Endling’ expertly bridges the gap between ‘Bloom’ and the altogether more subtle stylings of ‘Rosalie’.

Huge-sounding drums start the loud and proud sad pop of ‘Treat Jar’. It’s a song with a choruse you’ll want to bellow along to: ‘That’s why you hate me like you do’. It’s all tinged with sadness as Alex first sings ‘I just wanna feel some gratitude’ before then slyly telling the subject ‘You’re gonna have to make your own coffee now’. ‘Human Condition’ would sit nicely alongside contemporaries like Rosie Tucker and Soccer Mommy while ‘Split Up the Kids’ is a powerful and poignant account of grief as the band talk about feeling haunted and consider whether it’s better to have a new start or keep things the same. They then talk about grandparents being reunited towards the end of their lives with a line that can’t fail to give you goosenumps: ‘Sadness holds me tighter, seeing them together just one time. It’s like I’m barely even there’. The closing ‘Mostly Here’ has a waltzy feel in its opening notes as the band examine their ways and reveal how ‘If life’s a dream then I’m not sleeping’.

‘Four of Arrows’ is a huge leap forward for Great Grandpa and one that hits the target on every song.